The biggest benefits of distributed ledger technology are touted to be benefits of cost, time and risk across clinical trial records, regulatory compliance and health records. Arguably, the behemoth among them is health data. As early as 2014, a report out of the University of Iowa’s Carver College of Medicine suggested that by 2020, medical data is expected to double every 73 days.

The complexities surrounding health data stem firstly from the multiple sources that feed into the data silo. Accumulating the data into a single enterprise data warehouse would allow users to curate and utilize the breadth of the data for what it is worth. A recent WHO report stated that there will be over 2 billion people over the age of 60 by 2050. Statistics such as this compound the importance of being able to harness the hidden insights which reside in the wealth of health data out there. The relevance of big data has been reported within the pharmaceutical industry, the biotech industry and also within the insurance and academic sectors. The second complexity revolves around the changing face of healthcare practices and methodologies coupled with a constant outflow of data. A steady rise in evidence based research has upended several widely held medical beliefs and ideas. The third challenge is the unstructured and often sequestered data structure that exists within healthcare. But, perhaps the trickiest steeple in the hurdle to the finish line is the ever-evolving regulatory framework. There is no denying the vastness of the health data landscape. Times are changing however and we now see a shift from big data to seemingly smart data. The conundrum facing most healthcare companies is volume, veracity and vulnerability of the data.

Increasingly, the South Pacific region is becoming an attractive part of the world for the emergence of novel and exciting blockchain technology. A general sense of optimism is palpable in the region with several companies anchoring their work out of hubs such as Australia and New Zealand. Over the past year, there have been a growing number of blockchain launches involving New Zealand based firms such as Blockchain Lab, together helping to raise over NZ$140 million through ICOs. While the bulk of these launches have been in the banking, financial services and insurance sectors, there is one kiwi company that is looking to change the business of healthcare altogether. Introducing HealthDex.

I sat down with Dr. Mohsin Chaudhry, a medical doctor who is also the co-founder and CEO of HealthDex. Having been introduced to distributed ledger technology in 2016, Dr. Chaudhry soon discovered that his true passion lay with utilizing technology for the betterment of the health sector. He founded HealthDex in 2017 and since then has been on a journey of learning and liberation.

“The background to HealthDex is built upon the rapidly increasing volume of health data around the world. The main silos of data that we are looking at are clinical health records, genomics data, health IoT data and insurance claims data”.

He says that there are two fundamental problems within the health data ecosystem. “Disruption, is the name of the game. The power of health data needs to be unleashed” “For every incumbent health data vendor and healthcare company, there is a whole new generation of disruptor companies coming along. The likes of Luna DNA are Nebula Genomics are disrupting existing companies like 23andMe”.

The new crop of blockchain driven data vendors are looking to disintermediate the traditional business model of data service, which begins with collecting the data, curating it and then selling it to buyers at inflated prices. He expressed concern over the breaches of privacy that have become ever more prevalent in recent times. “As the data volume starts to grow, the security surrounding individual privacy becomes unsustainable” he says.

Currently, there are dozens of blockchain health data vendors operating in various regions at different capacities. While most of these vendors’ business models are consumer facing, Mohsin notes that they are “either half-way decentralized or are promising a decentralized model down the line”. This is where HealthDex comes in. The lack of a devoted health data blockchain platform to suit their needs is one of the big lacunae HealthDex hopes to fill.

Secondly, the existing vendors and consumers are ring fenced and are unable to search, connect, test and seamlessly transfer data across their boundaries. “HealthDex aims to fix this problem by taking up the role of an Amazon of health data, if you will”. In essence, the first major value proposition is to offer HealthDex in a Platform-as-a-service model, offering all the layers of data service that consumers look for, whilst tailoring the service to suit their unique demands such as GDPR compliance and HIPAA compliance. An enterprise level marketplace is the second critical value proposition. In contrast to the existing consumer facing models, HealthDex pitches itself as a B2B enterprise based business, whose incentive is structured upon on-boarding market-place participants, including data curators.

“We are creating the infrastructure where everyone can trade and exchange”. He emphasizes the importance of blockchain technology to the value propositions offered by HealthDex. “Being a public blockchain, we need a community of nodes that act as storage nodes as well as those that provide CPU and GPU power for the computational verification of transactions and the decentralized AI that HealthDex is working towards”. He adds that “dynamic data vending such as that involved in healthcare would traditionally require some sort of transaction arrangement between merchant and vendor, however blockchain eliminates the need for friction of this nature, instantaneous transactions are essentially what we are looking at offering”.

“HealthDex is being constructed as a public blockchain, however there is a possibility of incorporating permissioned nodes within the framework”, says Mohsin, emphasizing his strong advocacy for decentralization and the mission statement behind it. The infrastructure that goes into HealthDex begins with an IPFS decentralized storage layer, where the data is held in an encrypted format. The second layer built on top is the data curation layer, HealthDexDB which is uniquely tailored to provide data to the vendors. The encrypted data within the decentralized storage layer is linked up to the front end of the platform through a smart contract driven public blockchain that forms the next layer. The last layer is topped off  by the front end which provided the interface for the HealthDex marketplace and the DApps that will eventually go along with it.

The growing maturation of the blockchain technology coupled with a greater tolerance and understanding for the importance of regulatory interventions to ensure longevity of the technology makes this a very exciting time to introduce HealthDex into the market, says Mohsin.

“Our revenue model is not centered around analyzing or curating big health data, instead it is to provide a platform, something between Amazon and a cryptocurrency exchange is what we are looking to create”. He says that the bulk of the revenue from HealthDex would be relayed to the consumer and the data custodian who run the DApps upon the HealthDex platform. “we would aim to take a clip of that revenue ticket for providing the platform and the technical infrastructure to sustainably monetize the data”.

Mohsin is upbeat and excited about the market plan for HealthDex. Various strategies have been employed by the company to on-board clients into the HealthDex platform, with traction growing and competition weaning away. The company is currently in post-seed fund stage and are partnering with three TGE launch providers to kickstart the TGE marketing campaign. “The MVP is nearing completion, along with the technical whitepaper”. HealthDex is aiming at a pre-sale event within the next couple of months, followed by a mainsale component of the TGE, ultimately focusing on a Mainnet launch in mid 2019.

Coming out of the fertile innovation ecosystem in New Zealand, the founders of HealthDex are poised to shake up the business of health data collection and distribution. “A lack of financial and human capital are probably the biggest obstacles facing New Zealand start-ups”, says Mohsin. That being said, HealthDex is on its way to laying the tall poppy to rest. 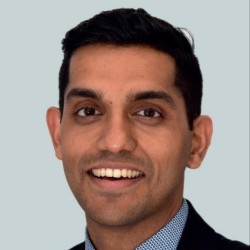 Tom Varghese
Co-Founder at Fortitude Advisory New Zealand
Tom is a blockchain crusader, orthodontist and business strategist with a combined experience of over 12 years spread over Dubai, India and New Zealand. He is a technology and healthcare futurist and Founder at HealthTech Symposium Series held in Auckland, New Zealand, where he organizes a bi-monthly symposium series concentrated around technology and its utility with respect to healthcare.